Another superb scale replica from Chris Williams. The unusual 5 metre Flamingo is both elegant and a fine flyer whether aerotowed or launched from the slope.

Please note – this is a hand drawn plan.

Watch the video of the Flamingo glider

And the build can be found on Scale Soaring UK 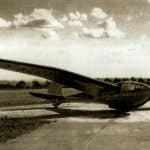 Below: A close-up of the Flamingo with its constructor Kurt Hendrich standing on left with Sr Luiz Bevilliasquea, the Director of the Aero Club. (Photo D. Hundsacker) 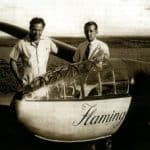 Hans Widmer and Kurt Hendrich, sailplane pilots from Switzerland who had settled in Brazil, produced the Flamengo. The design was started in 1944 and construction was completed in 1946. Widmer was credited with the design work and calculations. Construction was by Hendrich. Brazilian timbers were used throughout, doubt-less because imported materials would have been expensive. The general design followed European practice. The result was an ele-gant, gull winged sailplane of eighteen metres span and a relatively light wing loading. The wing profiles were apparently strongly cam-bered. Lighter than the contemporary German Weihe, though of similar general proportions, the low speed performance would have been very good but the Flamengo could never have been consid-ered a racing sailplane. The Flamengo continued to fly in Brazilian competitions in the nineteen-sixties and in 2002 was undergoing restoration.