Alexander Schleicher K-8 K-8B By Jilles Smits at 1/3.125 scale has been designed by Jilles to accept an electric motor up front if required. There are also a number of 3d printed parts available, two nose cones (one to be used for motor and one to be used for non-motor), wing/tailplane tips. The nose cones are totally interchangeable so that when flying as a pure glider the normal nose cone can be fitted with the motor in place. 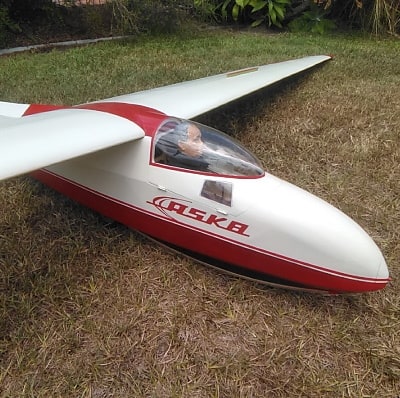 The K-8 was derived from the earlier Ka-6 design as a simple single-place sailplane with air brakes using construction techniques similar to the Schleicher K-7, simplified for amateur construction from kits. Emphasis was on rugged construction, good climbing ability in thermals and good handling characteristics.

The prototype K-8 made its first flight in November 1957 and over 1,100 were built in three main versions. The original K-8 had a very small canopy. Side windows for improved visibility were introduced in the next version, and the K-8B, by far the most numerous variant, has a larger one-piece blown Plexiglas canopy. The K-8C features a longer nose, larger main wheel located ahead of the centre of gravity and deletion of the larger wooden nose skid resulting in a roomier cockpit.

The cantilever high wings are single-spar structures of pine and plywood, with a plywood leading edge torsion box and fabric covering aft of the spar; the forward sweep is 1° 18′ and dihedral is 3°. There are Schempp-Hirth air brakes in the upper and lower surfaces and the wooden ailerons are plywood covered. The cantilever tail unit is of similar construction to the wings, with ply-covered fixed surfaces and fabric-covered rudder and elevators, and a trim tab in the elevator is an optional fitting. The fuselage is a welded steel-tube structure, with fabric covering over spruce longerons and a glass fibre nose cone.

There is a non-retractable and unsprung monowheel, with optional brake, and a nose skid mounted on rubber blocks in front of it, plus a steel skid at the tail.

A motor glider conversion of the K-8B was developed by LVD (the Flying Training School of the Detmold Aero Club) similar to their conversion of a Scheibe Bergfalke IV known as the BF IV-BIMO, in which a Lloyd LS-400 piston engine mounted in the fuselage drives a pair of small two-blade pusher propellers rotating within cutouts in each wing near the trailing edge.

Another motor-glider conversion was used by “Vestjysk Svæveflyveklub” in Denmark: it had a small Wankel rotary engine mounted in a nacelle on an aluminium stick above the main spar. The engine was started with a recoil starter like a lawnmower. The high RPM of the device made it extremely unpopular: the propeller tips created a permanent sonic boom, that made the plane extremely noisy. The harassed citizens of Esbjerg nicknamed the plane ‘the flying circular saw’ and the engine was removed.