One of the most iconic gliders to come out of the UK from Slingsby, the T21 was widely used for training the Air Cadets and many a first solo flight was taken in this glider including yours truly!

Instantly recognizable both on the ground and in the air. At 1/3 scale this is truly a glider model that will turn heads on the field. The prototype weighed in at 19kg with a span of 6 meters.

She flew straight off of the tow with no adjustment of trims and was a dream to fly.

There is a lot of wood in this model aircraft and it is a dream to build. There are a lot of of the full size still flying, so you are spoilt for choice. The T21 in the picture is modeled on the aircraft belonging to the historic Flight, 621 Squadron, currently based at Vale Of The White Horse Gliding Centre Shrivenham Swindon.

NEW
1/6 scale version at 2.74-meter span. The smaller version of the T21 Ideal for taking up the slope with a three-piece wing makes it easy to transport 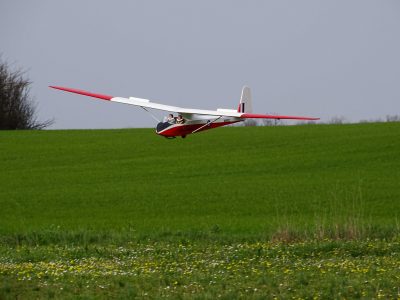 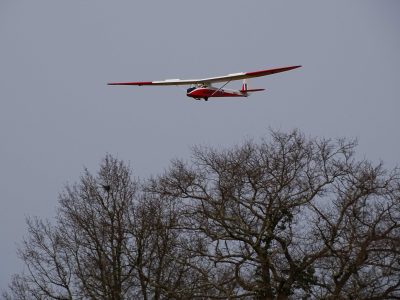 Hi Cliff, just a little word to say we finally experienced a break in the weather on Thursday and I managed 3 flights with the T21. Fantastic, just as I experienced the full size, slow and majestic, and the landings smooth and stable. Thanks for the cutting and help with the plan, here’s the proof in flight, cheers Terry.

The Slingsby T.21 is an open-cockpit, side-by-side two-seat glider, built by Slingsby Sailplanes Ltd and first flown in 1944. It was widely used by the RAF Air Cadets and by civilian gliding clubs, and is still to this day, a very popular machine.

The Type 21 prototype, the T.21P, first flew in 1944. It was of wooden construction covered with fabric, and was in most respects a scaled-up development of the single-seat German Grunau Baby, which Slingsby had built under licence before the war. The strut-braced wings had a span of 50 feet (15 m), and the upper decking section of the nose was removable, in order to expose the crew to the airflow in the same way as a primary glider. It was designed for use by the Air Training Corps, but was rejected by them and put into storage.

After the end of the war it was bought by the London Gliding Club, who found it very useful. Improvements were suggested, and the result was the T.21A, first flown in 1947, which had its wingspan increased to 54 feet (16 m), and dispensed with the removable nose section. Only one was built, but a slightly modified version, initially known as the T.28, was ordered by the Royal Air Force for Air Cadet training. This was the T.21B, which first flew in December 1947 and went into quantity production both for the RAF (named the Sedbergh TX.1 after the public school of that name) and for civilian clubs. Large numbers were exported to India, as well as to Egypt, Jordan, Kenya, Malaya, the Netherlands, Pakistan, Portugal, South Africa and Sweden.

Up to this time most training had been solo, on single-seat primary gliders, but the introduction of the T.21, together with its cousin, the tandem two-seat T.31, meant that virtually all initial training was being carried out in two-seaters by the early 1950s. The T.21 was popularly named “The Barge”, after its boat-like hull and sedate flying qualities, while the T.31 was often referred to as “The Brick”, again after its flying qualities.

Another one-off version was the T.21C, also known as the T.46, which flew in October 1957. The wings were lowered so they were placed either side of the upper fuselage, rather than on a pylon above the fuselage. This had the effect of increasing the span to 56 feet 6 inches (17.22 m). It also had an enclosed cockpit and redesigned tail surfaces.

Approximately 226 T.21Bs were built, with production ending in 1966. This total included 19 built for the RAF by Martin Hearn Ltd. at Hooton Park in 1950, and about five built by clubs and individuals from kits or spares.

The RAF received 95 Sedberghs, and the type remained in service until the mid-1980s, when all their wooden gliders were replaced by Grob Vikings. By this time most of the civilian clubs no longer flew T.21s, but the RAF fleet was auctioned off, and the type gained a new popularity with groups seeking recreational flying, in Germany and the Netherlands as well as the UK.

T.21P
The initial prototype, built with an open cockpit, offered to the ATC in lieu of the T.20, with a 50ft span wing; first flown in 1944.
T.21A
Civil version introducing the 54ft span wing.

T.21B
The production version for the ATC known as the Slingsby Sedbergh TX Mk.1
Slingsby Sedbergh TX Mk.1
RAF designation for the T.21B in ATC and RAF service
T.21C
A much improved T.21 with a new fuselage, enclosed cockpit and shoulder-level wings, which was re-designated T.46. Only one T.21C was built and has seen service up to the late 1990s.
T.46
The T.21C re-designated.